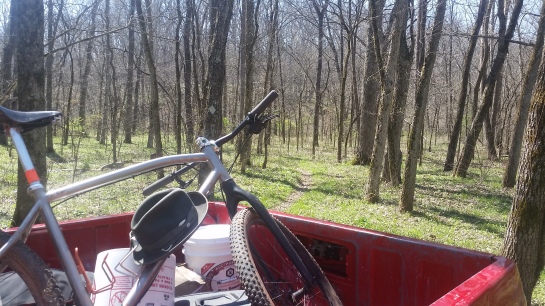 This weekend I decided to re-visit some of the trails we were forced to eliminate from the original CCX back in 2012. Back then, rainfall had the whole thing under water and we had   to re-route using another unmarked trail. I’m happy to announce that this piece of trail will be re-added to the Cinco-de-Crosso course for 2016. Weather won’t chage that. I don’t give a single shit. We will ride the Moon loop.

But I didnt come to that decision on my own. I was joined by my brother Brian, shown below.

This was to be his first time on 2 wheels in the woods, and the only bike we had was a hybrid I bought for my dad a few years ago. Behold his gloriousness: 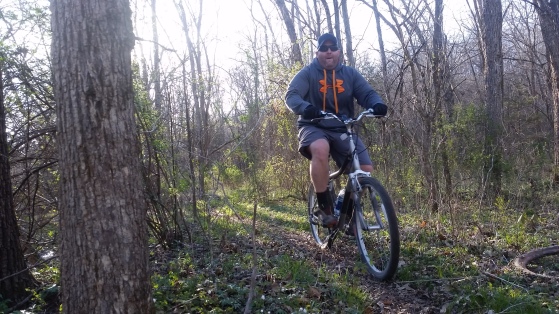 The day was packed with victorious conquest, fallen trees and fresh, fresh horseshit. Little bro even got to watch me go OTB into a patch of thorns. He laughed until he cried..just like an asshole little brother would.

And while the trail is in surprisingly good shape, I’m sure the horses will gather for the annual “Fuck You Bob Jenkins” parade and start making it rain any day now. Granted, there are a few “rough spots”…. 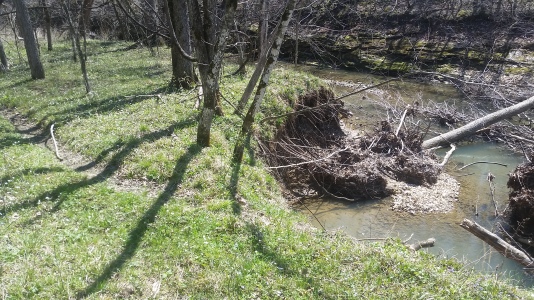 ….but overall it looks really good. And speaking of scenery, remember to bring your own camera for personal photos. I heard a story about a guy whose only photo from Landrun 100 was taken right after his jersey-zipper cashed out, revealing an unflattering upper torso. 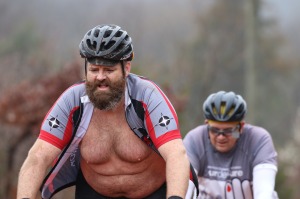 If you can’t laugh at yourself..

Sometimes I wonder if the guy in the background had his only LandRun pic photobombed by a guy with man-boobs. 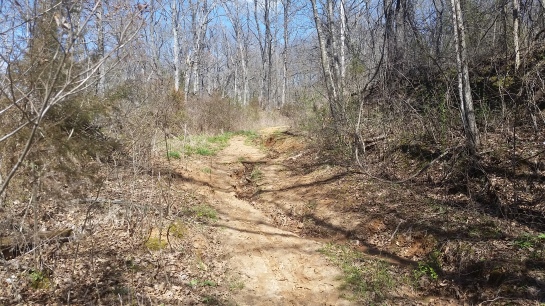 Heading up past Rutherford Bridge

Scouting ride/hike complete, we hit the grocery store for some grilled victory meats. I asked him what he wanted. He said, “After all that, I’m pretty sure we can eat whatever the fuck we want.” Music to my ears. We ate steaks, drank beers and farted a few times while watching the sunset.

We only rode a fraction of the course, but I think Brian got a really good taste of what this event is all about. Fun people doing fun things, getting tired as shit and then celebrating.

Nobody’s gonna remember Strava when we’re all in the retirement home shitting our pants someday, but we’ll remember clifftop beers with the people who matter. Get your ass to Tebbetts on May 7th and let’s make some memories.